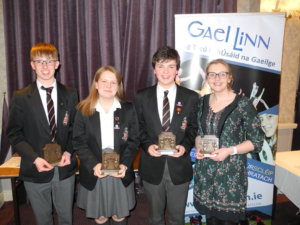 This year Kilkenny College entered Comórtas an Phiarsaigh (the All-Ireland senior Irish debating competition) for the second time, following our win last year. The team consisted of Jeff Duke, Cameron Murphy (both Form 6) and myself, coached by Iníon Ní Riain. After three victories, the team made it to the semi-final and debated the motion “Tá na meáin chumarsáide thraidisiúnta cloíte ag na meáin shóisialta” (Traditional forms of media have been overcome by social media). We debated against this motion, discussing fake news, the strength of TV and radio and the standards imposed on journalists and broadcasters. Out of the four teams, we were successful in progressing to Craobh na hÉireann (the All-Ireland Final) for the second year in a row. This meant that we were in the top four teams out of over 100 schools that had entered. We were then interviewed on KCLR, where we discussed the competition, the various motions we had debated, and of course, the coronavirus! Due to the unprecedented situation we find ourselves in, the final had to be postponed, but we hope we may go on to defend our title in the near future!