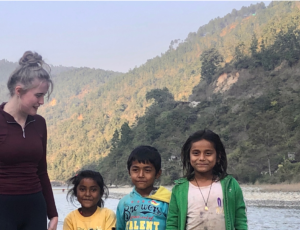 On the  9th January I flew out of Dublin airport to go to Nepal with my Dad and six others.  We were travelling on behalf of ‘New Growth’, a charity originally started to help an orphanage in Nepal become self-sufficient  by planting fruit and nut trees and cash crops to sell. New Growth has now expanded into local communities using the same model put in place to help the orphanage. It has recently teamed up with Ecomatcher who plant trees to offset large companies carbon foot print. The purpose of the trip was to expand on the charity’s work in Nepal.

It was a long haul flight with one stop. We arrived Friday morning at 6 am. On our way to our hostel (it was a kind of cheap hotel where all the aid workers stayed) the first thing I noticed was the traffic. There seemed to be no rules of the road. Most people drove a motorbike or travelled in, or on top of a bus. I asked a local guide about driving tests and the only thing they needed to do was to be able to drive in a figure of eight.

On our first day we visited the garden nursery where we bought fruit and nut trees for planting up in Simthali. We were helped and guided by Ram Hari,  general manager of the Children’s home and of the New Growth Charity projects in Nepal. We also visited the main Stupa (a Buddhist shrine) where I had to walk around it in a clockwise direction and touch the bells set in the walls. It is a very holy place and tourists pay to get past the guards. We had pizza that night, one of the few nights we had western food.

On Saturday after a breakfast of eggs and coffee we visited the Children’s home in Kathmandu. I expected sad deprived children but we were greeted with silk scarves and warm smiling faces. They ranged in ages from five to seventeen with the older ones helping to look after the younger ones. They walk to school down the road and sleep in different houses as we do in Kilkenny College boarding. They performed a traditional Nepalese dance and sang some songs both Nepalese and western (Zombie by the Cranberries). We ate lunch with them, it was my first introduction to the famous Dal bhat (national Nepali dish of rice and lentils with vegetable curry)  which haunted me while I was there. I talked to one of the girls who was about to go onto college to study farming. I carefully did not mention that I come from a beef farm as they worship cows in their religion! I learned they have no farm machinery and all the farm work is done by hand and by the women! We planted a tree there.

The next day we visited a demonstration nursery garden an hour’s drive outside Kathmandu. It is hoped that the farms up in Simthali will eventually be able to grow these crops of fruit trees and nuts in order to support their local community. This was the first day we spotted the Himalayan mountains. Back in Kathmandu we visited the Palace of the Living Goddess. She is five years old and was chosen as a baby to be the Living Goddess because her mother had a dream. When we walked into her viewing area I was told if she smiled at me I would soon die. Needless to say I didn’t look at her!

The following day I had a day of rest while my Dad and the other members of the charity met with officials of the Nepalese government to talk about the planting of trees to benefit local communities. It was raining that day.

On Tuesday we travelled to Simthali where the charity has leased land for the planting of the fruit and nut trees. Simthali is a community five hours drive from Kathmandu northwards into the foothills of the Himalayas. Simthali is double the height of Carrauntoohil. We drove there in land rovers up unpaved roads or tracks. That night I slept on the floor of a room in Ram Harry’s family house. There was no glass in the windows and no heating. I had a special sleeping bag and wore two layers of clothes. Just before settling down for the night we spotted a huge spider, it was the size of my hand. One of the lads promised he got rid of it but the next day he told us it had vanished. I was also worried a jaguar would 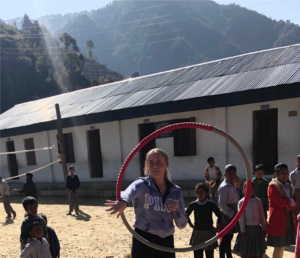 come in the window with no glass in it during the night. The school is central to the community, we brought toys for the children: balls and hula hoops. I had to show them how to use the hula hoops and then played volley ball with them.

We met with the local community and I loved the women’s traditional dress. There was a local festival and they planted trees to mark the start of New Growth’s latest project in Nepal. New Growth has teamed up with Ecomatcher to plant trees to offset the carbon footprint of large companies all over the world. Three thousand trees have been planted in Nepal since we returned home.

Back in Kathmandu the hostel seemed very luxurious. There were no shower facilities in Simthali so we got our clothes washed in the hostel. The next morning at reception we noticed our underwear hanging on ceiling fans to dry. It was very funny.

I really enjoyed my time in Nepal and would love to go back some day. Thanks to all my coffee morning sponsors and to Mr Clarke and the second year geography class who also fund raised for my charity.