Kale is it the way to go? 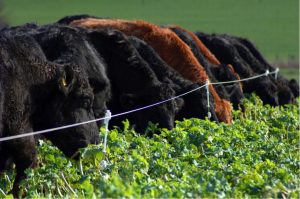 After the harsh winter and the testing summer, farmer have had to turn to alternative crops. Many farmers have grown kale as an additional crop to the bit of fodder that they have. Cattle will be introduced to this as a substitute to grass over the coming weeks and months.

However it is important to not introduce the kale too quickly, if cattle where to eat too much too quickly they could become bloated or nitrate poisoned. Farmers are advised to ease their cattle in to the kale in the period of a week. Roughage should be provided to stop the cattle from stomach upsets, bloating and scour.

80% of the crop can be used by strip grazing the livestock when only 40% is used when there is no strip fence. You can produce 8 tonnes of dry matter per acre of kale.

By: Stephen Young and Nathan Tomb