Senior Hockey Trip to The Netherlands 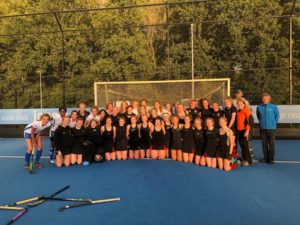 This year the senior girls hockey trip was to Utrecht and Amsterdam in the Netherlands. On Thursday the 5thof September, twenty-four girls from fourth, fifth and sixth year left school at 2:30 AM on a bus, bound for Dublin airport. With us was Ms. Threlfall Mr. Harding and Mr. Doole.  Our morning flight had us arriving in Schpihol Airport at around 9:30. There we waited for our taxis to bring us to our hotel, Hotel Mitland, in Utrecht.

We arrived at the hotel, changed into training gear and left again this time going to SV Kampong, a hockey club with over 3,000 members. The club has a huge clubhouse with a restaurant and many changing rooms and seating areas. The club has eight hockey pitches. On arrival we met Irish international goalkeeper David Harte. We had a quick lunch and then headed out to training. Training was about 3 hours long and we were coached by some of the club’s players, Stick and Felix. After training we had about an hour to relax before a team meeting and our first match at 6:30.

We played the clubs second u18 team, we lost 3-0 but in all it was a good match. After that we went back to the clubhouse and had dinner. We headed back to the hotel and went to a quick swim before bed.

Breakfast was at 8:30 the next morning and afterwards we headed back to the club for more training. This time we were coached by David Harte, Stick, a Dutch international player and the goalies got a session with the Irish women’s keeper , Ayeisha McFerran. Following this we had lunch and walked for about five minutes to reach Hockey Republic, Europe’s biggest hockey store. After spending an hour there we returned the hotel. Again we went swimming and relaxing in our rooms before our next match.

We played the Kampong u18 third team, unfortunately losing 1-0 then had our dinner while watching the Kampong first men’s team play another top Dutch team.

The next day we had a lie in and took a bus to Amsterdam. We dropped our bags off, went for lunch and met up at 2 for a canal tour of Amsterdam. We then had some time to shop before we were collected and brought to the airport. Our flight was a little delayed but not by much. A few people, were picked up in the airport and the bus made a stop in Tinryland. We arrived back here in Kilkenny at about 1AM on Sunday morning. This brought a great trip to a close.