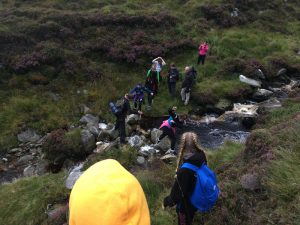 By: Roisin and Zoe

After a six hour journey we were greeted by the group of instructors who we grew to know throughout the trip. We were thrown straight into activities in separate group. The sometimes long bus journeys were made both longer, by Rob, and shorter by P and Bones’ jokes. Over the weekend we all did coast steering, surfing, canoeing, kayaking, archery and rock-climbing and a “four kilometre “hill walk.

On our first day we did archery and rock climbing. Some of us attempted to climb on the hardest level but not many managed it! Teige was by far the best at archery with several bulls’ eyes. Unfortunately on the archery competition the teams were a bit less than even so the A team won by just a few hundred points with the B team trailing behind.

Coast steering was thrilling for some and terrifying for others. It’s fair to say we returned with a decent amount of bruises. We started on a small 5 foot jump and ended on a huge 25 foot cliff. Between jumps we swam in lobster infested water climbed cliffs and were swirled in (Mr Willis’ personal favourite) the Washing Machine. While waiting for the bus, Lil’ Tipper, P’s heat trapping tent came in handy to say the least!

Canoeing and kayaking were many peoples favourite. We, attempted, to paddle through reeds (thanks John and Tom for all the help) and jumped, or more like were thrown, into bog holes. They were nearly impossible to get out of and it didn’t help that people we will not name kept pushing us back in!

Surfing was very difficult as there had been a storm the night before with 15 foot waves but a few people managed to get up on the board. Many shoes are now floating around in the ocean.

What started out as a refreshing walk in the sun turned into a 7 kilometre hike in the wind and rain (thanks Rob)? The one upside was that we found a secret beach and the last group eventually caught up.

Overall our trip to Achill was once in a lifetime experience where we made new friends and connections. Many new card games were learned and singing with Mr Berry was a great finish to an amazing weekend. (RIP to Rhiannon’s and Grace’s shoes lost in the bog and ocean).