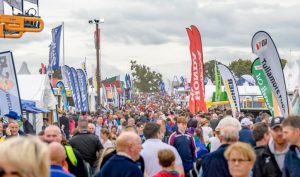 This follows three years of it being hosted in Screggan, Tullamore, Co Offaly where the largest outdoor agricultural event has had to deal with severe conditions including floods and storms. The overall figures for 2018 were down around 50,800 compared to last year’s event, with Wednesday’s activities for this year cancelled due to damaging winds from Storm Ali. The NPA will hope the change in location will bring attendance numbers back up to normal.

Talk first started to build that Carlow would be the host county this year on day two of this years ‘Ploughing’ in Tullamore following comments from chairman of the Oireachtas Joint Committee for Agriculture, Food and the Marine Pat Deering. The local Fine Gael TD let slip that a site in Co. Carlow was being considered for ‘Ploughing 2019’ while speaking on local radio station ‘Midlands 103’ saying ‘it’s a good location and a lot of work has been done’

By: Stephen Fennell and Stephen Young